What started out as a dream, where she was sent to “Macedonia” to go and nurse those afflicted with physical wounds and sores, and as she was standing on a hill, looking down, she witnessed a magnitude of “sick” people in need of healing.

As a teacher, ordained and anointed by The Almighty God Himself, together with the Holy Spirit, she transforms the lives of men chosen by God, and also making the choice themselves to serve the Lord in the manner which is pleasing unto Him.

Liza continues to phone the families and through these selfless acts establishes a relationship with them, even as they never met one another, until such time, that they are released from prison. Upon release she together with a group of people who also chose to form part of the Prison Ministry goes with the men to their family homes, to support them even in the community. Together with giving herself to God first, and then to these men,
she hands out a “starter pack” that consist out of all basic necessities, from soap to spray to clothes, and as much as even a cell phone, based upon the leading of the Holy Spirit to ensure communication.

Liza’s husband William has been supporting her all these years faithfully, until 6 June 2017 … when the Lord came to fetch him, to be with Father God in Union. What an impact he also made in these men’s lives, as he was seen as a father to them. In January 2018 one
of her spiritual sons (Gerswin) also passed on. Because of her commitment and loyalty to God she still does all the above, and is even more determined to pursue her calling amidst the passing on of her late husband. Because of the favor and blessing of the Lord upon this Ministry, it also expanded.

As Liza met people along the way, also extended family and friends of those that she accompanies out of prison, that was not in a physical captivity, but a spiritual one, that is worse than the former, and also by His Grace took them by the hand, and leads them out of bondage.

She has travelled all over, from:
• Khayelitsha,
• St Helena Bay,
• Vredenburg,
• Langebaan,
• Abbotsdale,
• Tulbagh,
• Beaufort West,
• Hermon,
• Riebeeck West
… and all made possible by God who sustains His own Ministry.

Liza also owns her fourth car, that is provided by God, of which all insurance, and maintenance is attended to by the people responsible for the blessing through Him.

The Lord laid it upon Liza’s heart to host a reunion in Prison, to motivate those whom have not made the choice to serve the Lord yet, to look into the lives of men that have made wrong choices in lives, but by His grace is transformed into the product God has intended, even before the foundation of the earth was laid. Here are some of their testimonies:

Felando
“I met Sr Anthony in Medium A Correctional Centre in Malmesbury in 2010. For 5 years and 3 months I formed part of her group in prison. After release, four years down the line we are still in contact, and she is still walking that extra mile with me. Through the calling and anointing upon her life she has made an impact and a significant difference in my life, and for that I will always be grateful. There are no words to describe what she means in to me. My daily and personal transformation that I experience in God, in and outside of Prison, where He set me free from alcohol drugs and an un-Godly lifestyle, was only made possible through an intimate and dependent relationship with God. I am now ten years alcohol, drug and crime free, because it is a day-to-day dependency lifestyle with God through His Spirit. He is the Source of persistence and motivation.”

Jerome
“I am fourteen years outside of prison, but not fourteen years in Him”. I entered into the enemies camp, and got drawn into a life of drugs again. In November 2018 I was assaulted with an axe which damaged the nerves in my neck, and left my left paralyzed to such an extent that Doctors said it will take approximately one to two years to heal. Today three months down the line my hand is already 85% healed. All Glory and Praise to the Lord.”

Justin
”I was in prison for two years already when the Lord, through my wife, sent a message that Sr Anthony must call me, and talk to me. Sr Anthony then called me and asked, “are you comfortable here in prison?”, and through what she shared with me made me realize that I need the Lord in my life. I joined the group and accepted the Lord in my life, and from there on allowed Him to show me His Love for me, and it is that same Love that keeps me going, even now that I am at home. I still keep in touch with Sr Anthony, and she with me, and because of her uncompromising spirit it motivates me to do the right thing, always.” 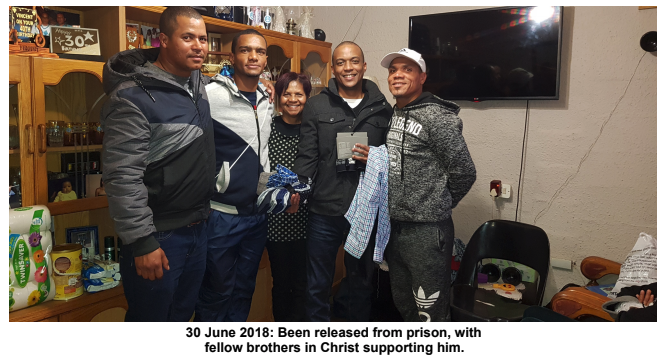 Abraham
“Sr Anthony came to prison where she held a church service. I never realized the impact this particular service had on me. After six years, the Lord started working in me, and I got dreams that I didn’t understand, and I had a sense of urgency, and was overwhelmed, and somehow I knew I have to made contact with that lady that held a service and told me that if I ever needed help, I can ask for her. I did not know where to start, and got hold of a
member, as I was describing her she immediately told me its Sr. Anthony, and that is how my road of salvation started. As I came into the group, I was fed with the Word, until I was ready to allow the Lord to work in me in the form of inner healing. I was a broken, messed up person, but the Lord through His Spirit through His instrument that He used, Sr Anthony, touched my life in so many ways, and He is still doing the impossible in my life.
From a confused, misunderstood, hurt and damaged person, He made me whole again and for that I will always be thankful for Sr Anthony, because if it wasn’t for her and the Lord, the grave could have been my resting place. Today I am eight years at home, a good job, married, with two children, also one on the way, and the Lord still uses me to impart what I received from Him into others’ lives. Thank you Lord for my prison experience, because it’s in prison where I got to know you.”